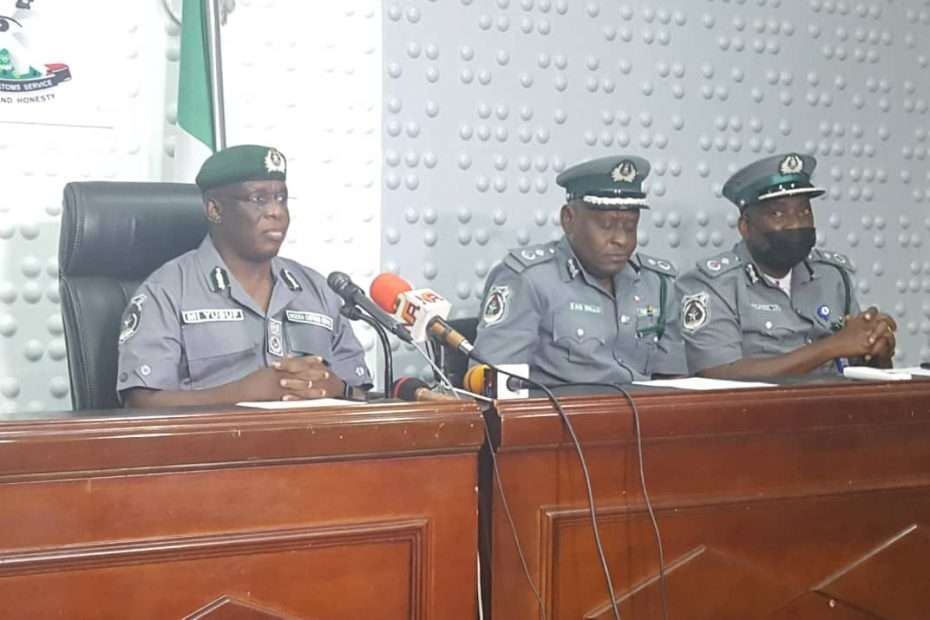 At about 1:20 pm on Tuesday 6th of July 2021, Comptroller Yusuf Malanta Ibrahim, Customs Area Controller of Apapa Area Command kicked off the half-year press briefing held in its conference room to publicly present how the command had fared between January to June 2021 in terms of revenue collection, anti-smuggling operations, and trade facilitation. According to Comptroller Yusuf, the revenue of 78.4 billion Naira that the command generated in June which was an outstanding achievement in that it represented an increase of over 90% when compared with 42.4 billion Naira collected in the corresponding month of 2020.

Comptroller Yusuf said that the sustained high level of anti-smuggling campaign of the command and the fact that there has been a significant increase in the level of compliance by importers and agents have resulted in reduction of smuggling activities in the command. Therefore, between January and June which is the period under review, the command seized 46 containers of various un-customed goods with a duty paid value of N27.6 billion. All these importations were made contrary to the provisions of sections 46 & 47 of Customs and Excise Management Act CAP C45 LFN 2004 and Customs & Excise Noticed No. 1491.

It is worthy of note to state that for the period under review (January-June 2021), the command generated a total revenue of N366 billion which represents a 61% increase when compared to the N227 billion collected in the same period last year.

The Export statistics of the command showed that goods worth N272.3 billion were exported through Apapa port between January to June 2021. These exports included Agriculture goods such as sesame seeds, ginger, hibiscus flower, and many mineral resources. The total tonnage of the said export stood at 1.6 million tonnes with a FOB value of $103billion.

When asked what was responsible for the successes recorded by the command during the period under review, comptroller Yusuf said it was as a result of the well-thought-out revenue drive structures that he put in place as soon as he assumed office as the Customs Area Controller. He also attributed the feat, recorded to the resilience and commitment of his officers and men to ensure that appropriate revenue is collected for the government. Comptroller Yusuf also mentioned the fact that they have continued to robustly engage stakeholders, as well as seamlessly facilitating compliant trade.

Also present at the press were some federal commissioners from the Revenue Mobilization Allocation And Fiscal Commission led by Mr. Adekunle Wright. The Federal Commissioners could not hide their admiration for how Apapa command had continued to do everything to ensure that government revenue kept increasing thus they paid glowing tributes to the command for their unprecedented performances during the period under review.